What is 3G?
How does 3G work?
What applications and services does 3G offer?
Does 3G use more power?
What research into health effects has been done?
What do the experts say about 3G and health?

In technical terms, 3G is a generic term covering a range of wireless network standards & technologies including; 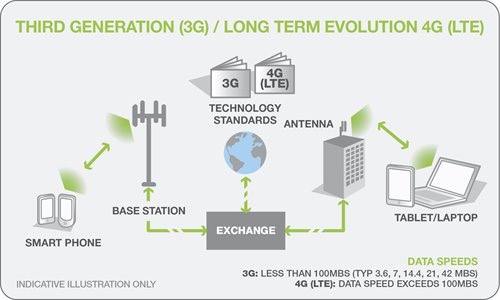 How does 3G work?

3G, or third generation networks, operate in a different way to 2G networks. When a call is made on 2G, a line is held open for the user’s conversation throughout the duration of the call. With 3G networks, the data sent across them is divided up into little ‘data packets’ which are reassembled in the correct order at the receiving end. This smart encoding means more data can be sent and it is sent more efficiently. In addition, 3G handsets can be in contact with more than one base station at a time and this provides improved performances in voice quality and data rates.

Some people call 3G “mobile broadband” because the evolution is similar to the difference between dial up internet and the always available broadband internet services.

What applications and services does 3G offer?

Example applications and services that use 3G are;

Does 3G use more power?

3G mobile phones and devices are low powered and use similar power to 2G mobiles. They also automatically reduce to the lowest possible power needed to maintain a quality connection. The reason that 3G can handle more calls and higher data rates is that this newer technology uses greater bandwidth and can utilize the frequency spectrum more efficiently.

3G devices generally have more applications like web browsing, email, and video calls so they can tend to use the battery quicker.  Of course this all depends on the device and battery type.

What research into health effects has been done?

Over 50 years of scientific research has already been conducted into the possible health effects from mobile phones, base stations and other wireless services including 3G.

What do the experts say about 3G and health?

In relation to wireless networks (including 3G) and health, the conclusion from the WHO is;

“A large number of studies have been performed over the last two decades to assess whether mobile phones pose a potential health risk. To date, no adverse health effects have been established as being caused by mobile phone use".