What is IARC and what does it do?

IARC is the International Agency for Research on Cancer, an agency of the World Health Organization (WHO).  IARC's mission is to co-ordinate and conduct research on the causes of human cancer and to develop scientific strategies for cancer prevention and control.

IARC classifies agents that humans may be exposed to based on the strength of the scientific evidence of their potential as human cancer hazards.  The agents include chemicals, complex mixtures, processes, occupational or environmental exposures, cultural or behavioural practices, biological organisms, and physical substances.

IARC does not consider ‘risk’ or likelihood of harm to humans. It only considers the strength of the scientific evidence for a cancer association. Importantly, risk may not be present at everyday levels of exposure to the agent being assessed.
Click here to see the objective and scope of IARC’s work.

How IARC and the WHO work together

National and international research programmes generate the necessary scientific evidence for the review of different agents.  Once IARC has completed a hazard evaluation based on the available scientific evidence for a particular agent, the WHO will use the IARC information to conduct a formal health risk assessment to determine the likelihood of risk to human health.

How does the IARC classification process work?

IARC establishes Working Groups to conduct the review of agents and the group meets to consider the evidence as a whole. They aim to achieve consensus among Working Group members regarding the adequacy of the evidence and how to classify the
agent(s) under consideration.

For each type of study the Working Group examines the strength of the evidence using standard terms and also the extent to which one type of evidence supports another. For example, whether the evidence is sufficient, limited or inadequate, and are associations reported in population studies supported by controlled laboratory studies.

Finally, the body of evidence is considered as a whole in order to reach an overall evaluation of the carcinogenicity of the agent to humans.

Cancer Association, Hazard and Risk – what do these terms mean?

When reporting on an agent’s classification, the IARC takes great care to distinguish between terms such as “cancer association”, “cancer hazard” and “cancer risk”. Each of these terms has a specific scientific meaning as explained by IARC:

A cancer 'hazard' is an agent that is capable of causing cancer under some circumstances, while a cancer 'risk' is an estimate of the carcinogenic effects expected from exposure to a cancer hazard. The Monographs are an exercise in evaluating cancer hazards, despite the historical presence of the word 'risks' in the title.

The distinction between hazard and risk is important, and the Monographs identify cancer hazards even when risks are very low at current exposure levels, because new uses or unforeseen exposures could engender risks that are significantly higher.

What are the IARC Classifications?

For each agent reviewed, IARC uses five categories to classify the strength of the scientific evidence that exposure to the agent may be a cancer hazard. 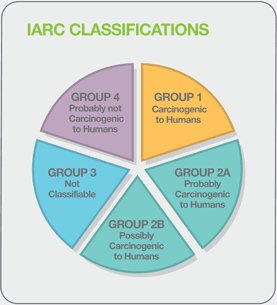 What has IARC already classified?

What is the IARC classification for Radio Frequency fields (RF)

On 31st May 2011, IARC classified radiofrequency electromagnetic fields as possibly carcinogenic to humans (Group 2B), based on an increased risk for glioma, a malignant type of brain cancer, associated with wireless phone use.

IARC state in the summary of results:

“The evidence was reviewed critically, and overall evaluated as being limited among users of wireless telephones for glioma and acoustic neuroma, and inadequate to draw conclusions for other types of cancers. The evidence from the occupational and environmental exposures mentioned above was similarly judged inadequate”

The WHO has updated the fact sheet on electromagnetic fields and public health : mobile phones to refer to the IARC classification.