What is DECT?
How does DECT work?
Is DECT safe?
Are there safety limits for expousre to radio waves?
Is it safe for children to use DECT?

DECT stands for Digital Enhanced Cordless Telecommunication. DECT is a common standard for cordless telephones and is a radio technology suited for voice, data and networking applications in residential, corporate and public environments.  Many cordless phones used in residential homes use DECT technology.

DECT, like all other radio communications systems, is based on the use of radio waves or radio frequency (RF) energy to transmit and receive signals. 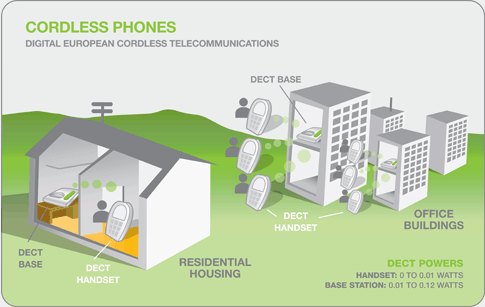 How does DECT work?

DECT systems are used in the home and office, and work up to 300m depending on the local environment.  DECT operates in the radio frequency range of 1880 - 1950 MHz. The output power of DECT equipment is very low, from 0 to 0.01 watt for normal handsets and between 0.01 and 0.12 watt for the fixed base stations.

DECT is a Time Division Multiple Access (TDMA) system meaning that the radio channel it operates in is divided into a number of time slots.  Each time slot can be allocated to a cordless phone handset.  The DECT base station transmits a pulsed ‘beacon’ signal so that handsets connected to the base are synchronised and are ready to take a call.

When a handset receives a call, it transmits back to the base only during the allocated timeslot for that handset.  That way the DECT system can have multiple telephone calls happening simultaneously.  An office environment would typically have multiple base stations where as a home usually has one base unit.

Click here for how DECT works - from the DECT Forum

DECT devices emit low levels of radio waves (also known as radiofrequency electromagnetic fields) when being used. It is worth remembering that the use of radio waves is a common part of our everyday lives and provides the benefits and enjoyment of television and radio as well as an increasing range of wireless communication services.

Because they have been used for so long, the safety of radio waves has been extensively studied for more than 50 years. This large and growing body of research has been reviewed by numerous independent expert panels, government agencies, standard-setting organizations and health authorities from around the world. All have reached the same general scientific conclusion: that there is no established evidence of any adverse health effects from exposure to radio waves within the limits applied to wireless communications.

In relation to DECT handsets and base stations, the conclusion from the World Health Organization (WHO) is;

“Portable telephones operate at much lower intensities than mobile phones. This is because they are employed very close to their home base station, and so do not need strong fields to transmit over long distances. As a consequence, the radiofrequency fields that surround these devices are negligible”

Are there safety limits for exposure to radio waves?

Yes there are. Comprehensive international guidelines exist governing exposure to radio waves. The limits have been established by independent scientific organizations, such as the International Commission on Non-Ionizing Radiation Protection (ICNIRP), and include substantial margins of safety to protect all people. These guidelines have been widely adopted in standards around the world, and also endorsed by the World Health Organization (WHO).

DECT products are subject to these standards. In the European Union compliance with the standards is shown by the CE mark. Due to the very low output power, the radio wave exposure from DECT handsets and base stations is far below the established limits.

Is it safe for children to use DECT?

The health and safety of our children is a concern to all of us. DECT devices are subject to safety standards endorsed by the World Health Organization (WHO). These standards take the safety of children into account by providing substantial margins of safety.