BASE STATIONS AND HEALTH - L2

What is a base station and wireless network?

Wireless systems use a network of radio base stations to provide service for mobile phones and other wireless devices.  Base stations send and receive low powered radio signals to and from mobile phones, and provide the connection to the main telephone network.   A mobile network is usually configured in a cellular grid format.

Base stations need to be located close to mobile phone users to provide good quality reception. 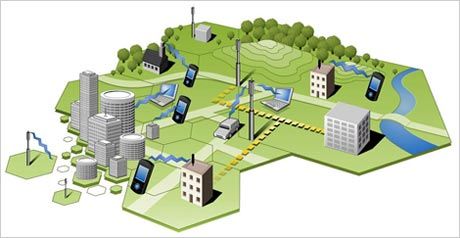 Base stations usually consist of a small equipment cabinet or hut, and antennas mounted on a support structure.

The antenna support structure can vary considerably.  Typical examples are:

Base station antennas are usually located on the most suitable structure in the area for example an existing building, tower or structure.  Sometimes a new tower or mast is required if there are no existing structures.  Each base station is connected to the main telephone network either via a microwave link using a small dish antenna, or via optical fibre cable.

How do mobile network operators decide where to site base stations?

To provide a good quality mobile service, base stations need to be located where people use their mobile phones.  A mobile network is typically designed on a "cell grid" basis covering a geographic area.  Base stations are located either in the centre of each cell or on the corner of a group of cells.   The number of base stations required for a given area will depend on the terrain and number of people using mobile phones.

The radio signals that base station antennas transmit are primarily transmitted from the centre of the antenna outwards.  This means that the antennas need to be placed in locations where there are no obstructions, such as building rooftops and masts.

How many base stations are required in a given area?

Mobile networks have a finite capacity which means the ability to cater for simultaneous phone calls.  The more people using mobile phones, the more capacity is required and this usually means more base stations closer together.  Mobile networks must be designed according to the local population and number of people using the network.

What different types of base stations are there?

Base stations are broadly divided into the following categories

How strong are the environmental EMF levels near a base station?

Base station transmitters use relatively low power and environmental EMF surveys conducted in many countries around the world have shown background EMF levels to be equally very low.

The World Health Organization has reviewed the background EMF levels from wireless systems and says,

"Recent surveys have shown that the RF exposures from base stations range from 0.002% to 2% of the levels of international exposure guidelines, depending on a variety of factors such as the proximity to the antenna and the surrounding environment.   This is lower or comparable to RF exposures from radio or television broadcast transmitters"

Specifically on EMF levels in public areas the WHO says,

"Recent surveys have indicated that RF exposures from base stations and wireless technologies in publicly accessible areas (including schools and hospitals) are normally thousands of times below international standards."

Do base station EMF levels vary?

Mobile networks are specifically designed to use the lowest possible power from base stations and mobile phones necessary to quality voice or data services.  The network automatically adjusts the base station transmitter power according to how far away the mobile phone users are.

With the optimal network design, base stations are located close to mobile phone users and produce the lowest possible EMF.

The further away base stations are located from mobile phone users, the higher the power required resulting in higher EMF levels.

Should base stations be located near homes and schools?

Therefore to provide good reception and minimise EMF, base stations need to be located close to users and where we live.

Base stations operate at low power.   Independent surveys demonstrate that the background EMF level in the community from base stations is very low, and similar to environmental EMF levels from broadcast radio and television.

“Considering the very low exposure levels and research results collected to date, there is no convincing scientific evidence that the weak RF signals from base stations and wireless networks cause adverse health effects”

RF safety at base station and antenna sites

The MMF and GSMA has prepared a document giving practical rf safety guidance for personnel working at base station and antenna sites.  Click here to download.

Download the Mobile Communications and Health Booklet from the GSMA