What is Wi-Fi?
How does Wi-Fi work?
Where am I exposed to Wi-Fi signals?  What is a hot spot?
What do the experts say about Wi-Fi and health and what research has been done?
Using Wi-Fi in schools and offices?
Is is safe to use a Wi-Fi enabled laptop on my lap?
Wi-Fi devices and applications
How do Wi-Fi signals compare to other radio signals?
Wi-Fi and health - World Health Organisation Advice

Wi-Fi, short for Wireless Fidelity, is the term used to describe high speed wireless network connections over short distances between mobile computing devices such as laptops and the internet.  These are sometimes termed wireless local area networks or WLAN's.

It is also increasingly used for communication between consumer electronic devices such as televisions, DVD players, digital cameras and mobile phones. 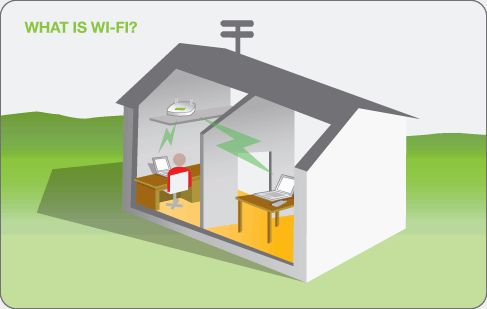 How does it work?

A Wi-Fi network typically contains one or more Wi-Fi devices, each of which sends information on radio waves in the form of low powered short bursts or “packets”. A Wi-Fi network can be used to connect computers to the internet, to each other, or to wired networks.  A common example is a laptop connected to the internet using a Wi-Fi modem or router at home.

A Wi-Fi device (e.g. laptop) only transmits a signal when sending data.

Where am I exposed to Wi-Fi signals? What is a Wi-Fi hotspot?

“Hotspots” are the name given to a Wi-Fi access point connected to the internet.  It is common to find hotspots in hotels, airports, cafes, offices, schools and universities.

A hotspot can encompass several access points connected to a single network. The user is free to move within the hotspot area
The number of Wi-Fi hotspots is increasing in many countries, particularly in inner city areas so you are unlikely to be far from a Wi-Fi signal.

Hotspots use very low power, and only transmit when data is being sent, except for a small beacon signal to identify the hotspot to devices

What do the experts say about Wi-Fi & health, and what research has been done?

Extensive research has been conducted into possible health effects of radio frequency technology.  Wi-Fi signals are in the radiofrequency range with independent health experts concluding there are no established health effects when compliant with safety recommendations.

Furthermore, Wi-Fi signals (access points & home Wi-Fi) use a mere 100 milliwatts of power, less than half the power of a mobile phone.  Wi-Fi connections are also “silent” until data is transmitted, so radio signals are only created during actual transfers of data.  Even heavy users accessing hundreds of megabytes of data a day would only end up transmitting for a short period overall.

Using Wi-Fi in offices and schools

Wi-Fi allows greater freedom for working on computers and other devices such as PDAs in schools and offices.  People in offices and schools do not have to sit at their desk in order to work but can move around and choose an environment that suits them.

Wi-Fi networks provide an efficient and portable way of connecting computing and other electronic devices.  Networks can be installed in offices and schools without the need for expensive and disruptive installation of cables, providing classroom & teaching flexibility.

Is it safe to use a Wi-Fi enabled laptop on my lap?

It is rare that new laptops are sold these days without built in Wi-Fi.  Manufacturers do not recommend that laptops are used directly on your lap for extended periods due to operating posture and heating from the electronics and battery.

Laptops however, must pass a stringent safety test which includes a radio frequency exposure assessment.

How do Wi-Fi signals compare to other radio signals? 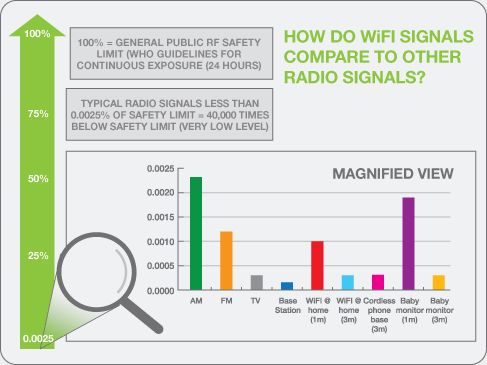 This chart shows EMF levels measured in a typical home as a % of the WHO recommendations for general public exposure.  All EMF levels are very low, including the wireless devices operating inside the home.

The total cumulative EMF level from all devices in the home was less than 0.0025% of the WHO guidelines.  This is 40,000 times below the safety guideline.

The conclusion from the World Health Organization on Wi-Fi and health is;

WHO Fact sheet 304 - Base stations and wireless technologies